Share a memory
Obituary & Services
Tribute Wall
Read more about the life story of Helen and share your memory.

Helen Sophie (Brockmann) Lunzmann the daughter of William and Sophie (Kirchhoff) Brockmann was born November 28, 1928 near Harbine, NE. She departed this life Saturday, November 19, 2022 at Parkview Haven Nursing Home in Deshler, NE at the age of 93 years.

She was baptized at Zion Lutheran Church in Harbine, NE by Pastor C.P. Pebler December 16, 1928. She was confirmed June 28, 1942 at St Paul Lutheran Church near Stoddard, NE by Pastor John Vollstedt. Her confirmation verse was Luke 11:28 Blessed are they that hear the word of God and keep it.

When she was six years old the family moved to Thayer County. She went through the eighth grade at country school south of Hebron. Before she was married she did housework for people and took care of their children when their parents worked.

She was united in marriage to Ervin Lunzmann on August 11, 1963 at St. John Lutheran Church in Chester, NE by Pastor Robert J. Leige. They made their home north of Byron, NE on a farm and was a member of St. Peter Lutheran Church. She was active in her church. The Lord blessed this union with two daughters Alice and Judy.

She was a home mother until her girls were in school. She then went to work at Foote’s Cafe for 16 years in Chester, NE. She enjoyed gardening, sewing, quilting, cooking, playing cards but most of all spending time with her children and grandchildren.

She moved to Deshler in 2002 and joined Peace Lutheran Church in 2010.

She is preceded in death by her husband Ervin, brother Frederick Brockmann, and sister Edna Reinke and husband Clarence.

To send flowers to the family or plant a tree in memory of Helen Sophie (Brockmann) Lunzmann, please visit our floral store. 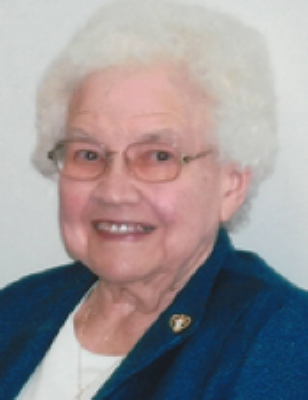